Dangers of Fatigue on the Job Site 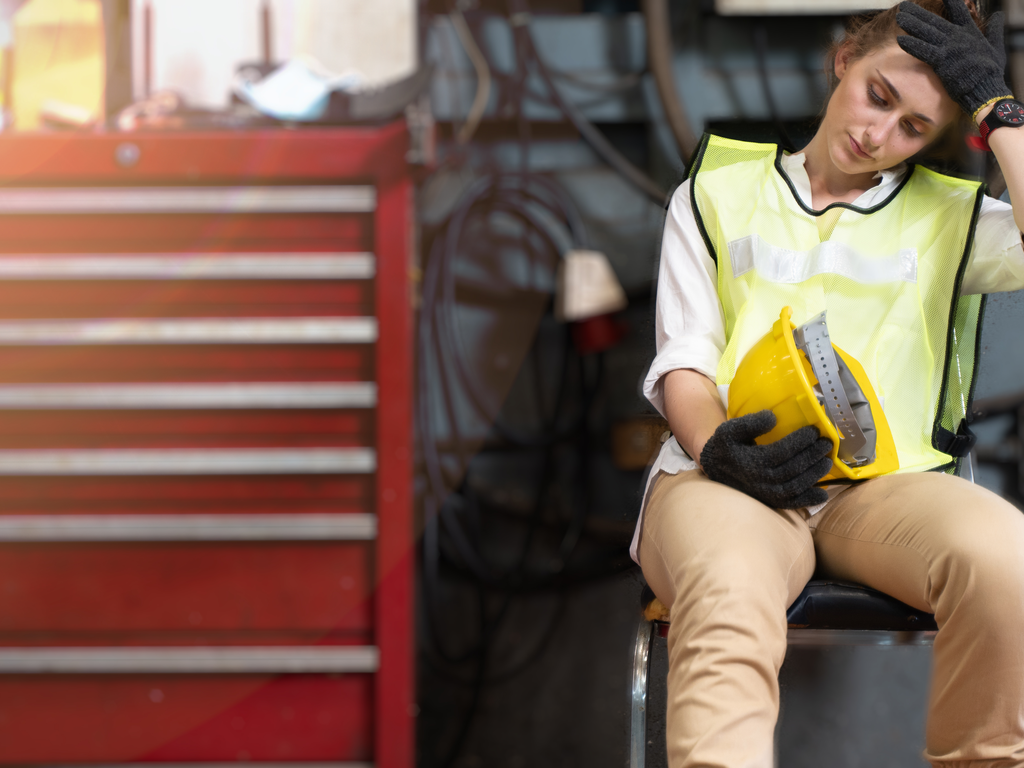 Fatigue can not only lead to decrease in productivity but an unsafe job site.

There are many potential dangers when working on a jobsite. In construction, an alert mind and attention to operating machinery can avoid a severe injury or possibly save a life. One way to minimize risk out in the field is to combat the challenges that come with fatigue.

Fatigue can be described as tiredness, lack of energy, and an increased effort required to complete tasks at a desired quality level. Drowsiness is related to fatigue but is a state with varying degrees between being fully awake and approaching sleep.

Impact of fatigue on the construction workforce

Based on research, losing two hours of sleep from the recommended eight hours has the same impact on concentration and reaction time as drinking how many beers?

a) None with enough coffee or energy drinks

The correct answer is ‘b.’ Losing two hours of sleep produces similar psychomotor impairment as 2–3 beers. Answer ‘c’ is the equivalent of getting no sleep.  For context, 0.08 is the legal limit for operating a motor vehicle on public roads. Think of how many of your employees drive to the jobsite and/or operate machinery or heavy equipment. Doing any of the above or making important decisions at this level of impairment is cause for concern. After all, it’s estimated that 13% of workplace injuries are related to fatigue and those who sleep less than five hours per day are more than three times as likely to be injured than those receiving more than seven hours of rest.

The National Safety Council works in conjunction with various national agencies and periodically conducts surveys regarding fatigue in the workplace. Their research has found the following people are at the most risk for fatigue and fatigue-related incidents:

Their research shows that 97% of workers have at least one of these workplace fatigue risk factors and more than 80% have two or more.

How to combat fatigue

Despite the somewhat obvious nature of the issue, the solutions can be much more elusive. In many industries like construction, shift work and long hours can be unavoidable as project deadlines approach. Simply getting more sleep proves difficult too, as more than 70 million people in the U.S. suffer from sleep disorders like sleep apnea.

Some of the easiest solutions to implement are also low in cost. Increasing worker awareness of fatigue with training on causes, signs, and symptoms can be accomplished with a short informational meeting, webinars, and posters. The National Safety Council has a lot of this material on their website including posters, a 50-minute webinar, and various infographics. OSHA’s site is another great resource with information and materials in the worker fatigue prevention section.

Employers can also offer training on how to get better sleep, including how to set-up a sleeping environment and activities to avoid prior to bed (e.g., tablet and smartphone use). Wellness screenings can be extended to include screenings for sleep disorders. Manager attention to shift scheduling and task overload can also be initiated with some ease. More costly solutions include fatigue risk management systems and driver alert systems (e.g., OpGuard and Optalert). These systems work to monitor eyelid closure as well as facial and head movements using in-cabin camera equipment and are non-intrusive in nature.

Employers lose an estimated $136 billion per year in worker productivity due to fatigue with 84% of that stemming from reduced performance while at work—not to mention the increased likelihood of injuries to people. Aside from productivity, employers have increased healthcare costs such as an additional $3,000 per employee per year for sleep apnea or an additional $2,224 per employee per year for health conditions exacerbated by insomnia. Based on these statistics, implementing fatigue-based education, training, and initiatives into your risk management strategy can generate a high return on investment.